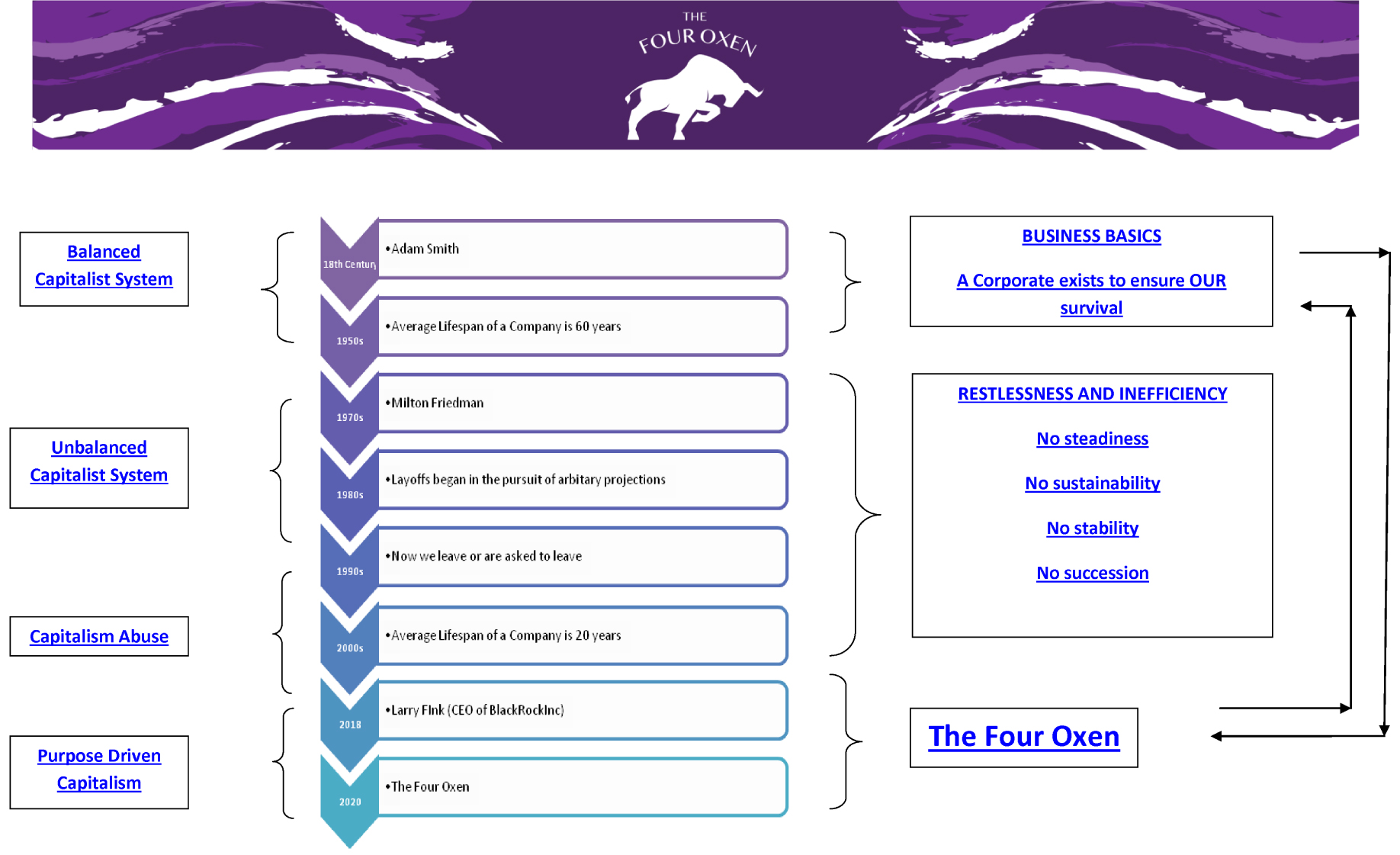 According to Adam, it is human nature to advance personal interest. Thus corporations were the most effective, powerful and beneficial organisations in the world. The average American would invest in Companies and enjoy good returns. Back then, executives and directors saw themselves as stewards of the public interest and served not just the shareholders, but employees and communities.

Smith, however, was not blind to a Businesses Owner’s propensity to rely on short-term goals or a finite mindset. We all have a selfish  motivation to build durable companies. Thus it is in our human nature to advance our interest, which Smith called the “invisible hand”. Amid the 20th Century, production was the ultimate objective for all industry and commerce. Thus, a Company’s interest came second to the importance of the consumer, whose needs furthermore bear sacrifices to the needs of the producer. In the end, the invisible hand ultimately benefited the consumer and as a result, an average business lifespan of 60 years.

The selfishness of outside investors and an analyst community put the capitalist system entirely out of balance. The introduction of this unbalance system is after the influence of a Nobel Prize Winner in Economics and the most significant theorist of today’s Capitalism, Friedman. Friedman is responsible for what is now known as the heart of finite-minded business practices, the theory of Shareholder Primacy.

According to Friedman, Shareholders are the rightful employers of the Company’s executives and directors, whose responsibility it is to conduct Business following the Shareholder’s desires. This desire, generally, is to make as much money as possible, while conforming to the basic rules of society, as embodied by the law and ethical customs.

Based on the Shareholder Primacy Theory, there is but one social responsibility of businesses, which is to use its resources and engage in activities designed to increase its profits so long as it stays within the rule of the game. In other words, the sole purpose of Business is to make money, which rightfully belongs to the Shareholders.

As a result, the general stance is that the Owner of a Company sits at the top of the benefits food chain and that Business exists solely to create wealth. Thus, it is often assumed, up until today, that putting pressure on a Company to cut the cost to maximise the return on investment is the only way that the game of Business is successful.

In reality, Friedman’s view on Business is very one-dimensional. However, recent history has shown that Business is much more dynamic and complicated. In an attempt to please shareholders and the desired short-term gains, layoffs began to destroy lifelong commitments to a Company, and pride, trust and loyalty diminished in both directions. By now, the new normal is that we either leave or are asked to leave.

In short, due to Friedman’s unbalanced capitalist teachings, we have been building businesses for the past 40 odd years, with a self-destructive definition of the business game. The result of the “after me the flood” mindset, we forgot that Capitalism exists to advance the quality of life by easing or enhancing our lives. Unlike Friedman’s selfish mindset, Capitalism is not only about prosperity, but also progress. Employees and the Human Species in general, want to feel part of a bigger picture than just ourselves, or stated differently, part of an infinite cause.

Many leaders practice in Business today is more of an abuse of Capitalism, which is organised to advance the interest of a few people who abuse the system for personal gain.

Today, the average lifespan of Business has decreased drastically to 20 years. Many blame the development of the destructive effects on technology. In contrast, others argue the decline in lifespan for a business is a symptom of a more insidious root cause.

This insidious root cause might be found in the futurist trend when the concept of forecasting was considered critical across multiple institutions between the 1950s and 1980s. Teams of futurists examined the technological, political and cultural trends to predict their future impact on Business and prepare for it. As a result, Companies felt pressure to grow incredibly fast to ensure maximum return on investment for shareholders and a compulsion to go public.

Executives and directors yielded to the pressure of playing with the finite mindset and began making decisions based on the short-term gains, despite the infinite, long-term benefits.

By now, the average lifespan of a Company reduced drastically since the 1970s. Still, the South African Labour Market and Competitiveness have dwindled frighteningly low because of strict reliance on Friedman’s Shareholder Primacy.

The Global Competitiveness Report and independent Rating Agencies continue to downgrade South Africa into hopeless and dismal economic rankings. Ultimately, we are heading towards a repeat of the 2008 Global Recession. The reasons for these dismal rankings are plentiful and amongst others are due to unethical and corrupt business activities. Corruption, whether in the private or public sector, has resulted in many citizens and employees simply refusing to trust businesses and institutions.

Start-ups and small businesses cannot continue to prosper in these conditions. Our finite mindsets approach to employee relations has to change to ensure that the threats to our success and survival can be eradicated. In other words, WE NEED TO GO BACK TO BASICS.

Capitalism abuse, due to the development of an unbalanced system, brought us instability and no promise of sustainability or succession. The drive for speedy growth destroyed the value of steadiness. Business Owners have mostly lost their sense of purpose and in their journey to achieve short-term successes, neglected to stay true to their purpose and cause in Business.

What we have as a result is short-term minded Human Resources Management strategies, which only ensure success and sustainability to those consultants who hire and fire on demand. Stakeholder Primacy will result in the loss of the privilege to operate and own a Business. Businesses will eventually succumb to short-term pressure to distribute earnings and, in the process, sacrifice investments in employee development, innovation and capital expenditure that are necessary for long-term growth. By feeding those who survive on your misery, no business will ever operate to their fullest potential and will not stand a chance to fight threats.

In 2018, Larry Fink, the founder, chairperson and CEO of BlackRock, Inc. caused a bit of a stir in the financial industry when he wrote an open letter to CEOs titled “A sense of Purpose”. The call to act on purpose is not a recent discussion. Still, when someone in the position of Larry Fink encourages the financial world to avoid playing the finite game, it moves conversations in the right direction.

The Four Oxen believe in assisting the most vulnerable in our society. We do this by trying to keep as many South Africans employed as possible. Start-ups and growing businesses, most often referred to as SMMEs, employ approximately 75% of South Africans and therefore deserve to be supported in their employee relations.

SMMEs are the most vulnerable to inefficient and hostile employee relations. They, therefore, should be offered the assistance to approach their employee relations in such a way that makes business sense and that ensures sustainability, stability, steadiness and succession.

The Four Oxen base their services on these four principles and thereby ensure that SMMEs create psychological safety, fair compensation and a sense of being part of a just cause for their employees. Business Executives are reminded of their purpose in Business and learn to become stewards to the greater community. Ultimately, Businesses will learn to employ their invisible hand once more and develop Capitalism with a purpose.